Wanted to try a creek I haven't fished since May 07. It's known for holding some big fish, so I went hunting. Plan was to go up one totally new stretch bridge then walk back. I would use Sammy for long casts up uncharted water, then Wolkabuzz/tube all the woodpiles.

Got on the water at 6:30am and immediately started catching fish on Sammy. Mostly small 10-12. Lots of shallow shale/bedrock would hold dinks but not the pigs I was looking for. Kept going and going. Caught a 16.5" smallmouth bass on Sammy.

Caught this deformed smallmouth bass on a Sammy 100, an 18.5"er that would have gone close to 20" If it's spine was straight. This fish was thin and actually came for the bait a second time after I had failed to hook him at the other end of the pool. 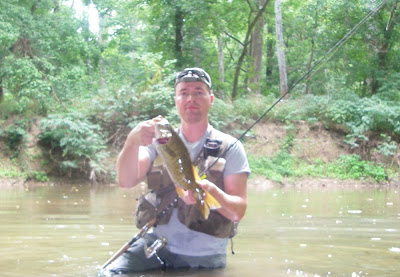 Fishing was very consistent. When the sun finally came out and the heat shot up. Smallies were pulled out of the wood by Wolkabuzz baits 'popped'.

Ended up seeing three bridges total. Finished up the 4.3 mile wade with 45 fish, but then decided to wade back and hit spots I had seen fish with WBZ, this 17.5" fish included on WBZ: 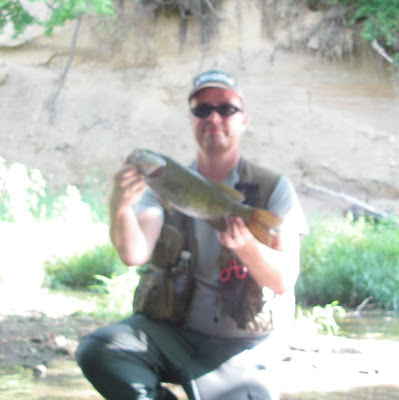 Never did find the hawg hole I was looking for. Couple areas with woodpiles could have held bigger smallies I never saw. Had a few chances at bigger fish, but didn't hook up.