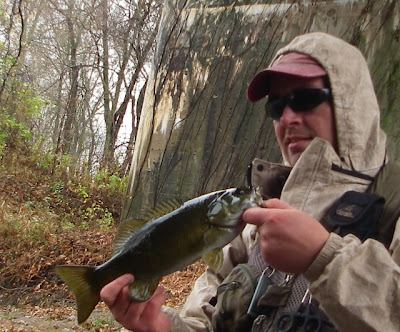 I hit the water today with the intention of seeing some floats dunk. The last couple days had seen steady drizzle, and a cold front was coming in with temps dropping towards night. Grabbed the float and fly rod along with my box of jerkbaits and headed off for some late fall action. The temps were in the low 40's and the air got colder after the rain cleared up.

I arrived at a winter hole I knew held fish this time of year. Started out working a spinnerbait and jerkbaits. No luck until I started drifting a weightless 5" Superfluke. It proved to be the ticket, the bait fluttered down slowly. I got 6 in that winter hole in 3 hours including a couple 15-16". No sniff on the Float and Fly. 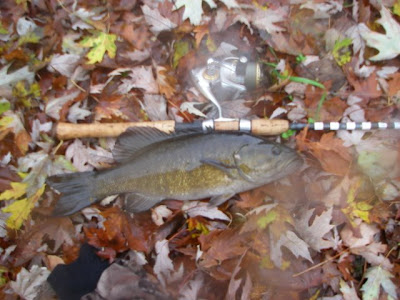 Was pretty much happy and ready to head out when I decided to investigate upstream. Found more fish at the top of a riffle in a large rip-rap filled eddie. After 3 12-13" and missing a bunch of dinks, I turned around.

I saw a fish spook out of the shallows in a pool I had walked through without fishing before. On my first cast, the line jumped. I whiffed. Hmmm. In the next 30 minutes, I got bit on nearly every cast landing 8 fish from 13-16.5"s. These fish were supposed to be down in that wintering hole. Guess the water being so low enabled them to stay longer. I did also spot a series of undercut banks for them to dissappear under should they need protection. 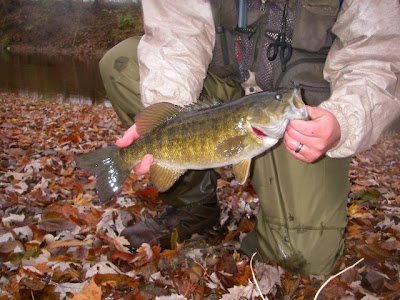 Headed back down and nabbed another 15" and 16" on the Superfluke, before heading home. Lots of good medium sized fish, no real dinks in the bunch. They were pretty much smashing the bait. There was no telling how big of a monster would appear on the other end. For 45 degree water, this was a feeding frenzy.

This was a lot of fun. Smallie fishing had gotten into a rut in the creeks for me. The change in temps and weather provided a very nice change from chucking topwaters.