Currently in the mood to catch some bigger fish as the year closes out. The last three year's winters always seem to produce some large smallmouth bass. To end 2008 with a bang, I set out to hit one of the better hawg stretches I know of. Weather was nice, sunny and low 40's. Water ended up still being crystal clear and very low. I could see down 6,7,8 feet when the sun shined right. It was very informative. I could see boulders I didn't know where there as well as killer dropoffs and ledges. This area is a wide stretch with plenty of water and a high cliff with trees that overlooks the creek. The shade from the cliff and lack of current had allowed most of the creek to lightly freeze over. Right where I wanted to fish!

I tried to float and fly everywhere there was open water. Got the sense that my efforts were a waste of time. I didn't see any fish in that large pool. I finally drove up a few holes and walked upstream to fish. Finally, found open water, the key was how high the eastern cliff was. No eastern cliff- no ice. Got to some riprap and finally found some fish. Carp and Channel Catfish with a couple smallies mixed in. The fish were a good 6-7' down. I adjusted my leader and promptly got ignored. It became fun picking out fish with my polarized lenses under huge rocks and boulders. I saw a large drum looked to be hibernating. 2 Large channel cats in 6-10 lbs range in an eddy appeared to asleep even when I dropped down rocks near them. Few smallmouth sightings, but many carp, suckers, and especially catfish. Somewhat active within a small area.

Walked up another run and found schools of fish in another area I was unaware of the contours of. 1 smallmouth out of all the fish I spied on. Again more cats then bass. Were the smallmouth hiding? I walked up another large pool, this time the cliff was on the side the sun sets on and was largely free of any ice. When I found more dark shapes moving, they again ignored my Float and Fly. I switched to a tube.

There were a couple smallies huddling together next to a medium rock. One turned out to be another drum. I pulled my tube slowly to the bass that appeared 15" laying on the bottom against that rock. Then the fish's head exploded into a red mist! Just kidding. When the tube finally got within a couple feet I inched it very slowly towards my target. Letting it sit for as long as 30 seconds with no movement. The retrieve had taken close to 5 minutes at this point. The bass's gills flared and my tube was gone. I set the hook hard and felt the hook bite home! I pulled him away from his rock and that bass was both surprised and larger than it looked in the water. Not much of a fight, but a lot of satisfaction. Ended up being my only fish and bite of the day. Measured a bump above 18". 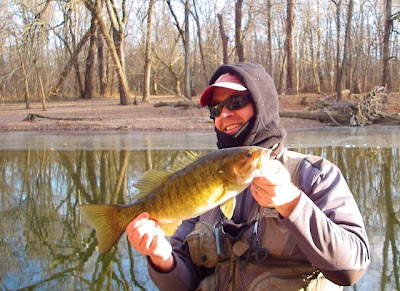 Later, I walked up on a couple smallies wedged under a ledge. Fish were hiding today. Weather was good enough. We need some rain bigtime, water is too darned clear!
Posted by BT at 7:07 PM