Had to take care of some stuff so I took they day off. Was hoping the sun would have fish active enough to hit the fly. Fingers crossed on frozen creeks with such low water.

Feeder creeks looked ok on the drive over. Water was crystal clear and low.

Walked up quietly on some riprap and saw some carp around a rocky hole. This time of year, fish are packed in those areas, so I knew some smallmouth would be nearby. Spotted several 14-15"ers but they wouldn't have any of the fly.

Tossed up ahead and waited as a large fish approached and appeared to eyeball my float really close. Tilt, the float budged! He had the fly. A short fight with a lot of headshaking and I beached the fish. It was a nice one bright gold with olive splotches, a huge mouth, head, and a huge tail. Measured at a bit over 18" on the tail pinch. It's been since October 11th since I caught a fish that hit 18". Slowed down the yearly goal to get 50. An above average December can still get me there 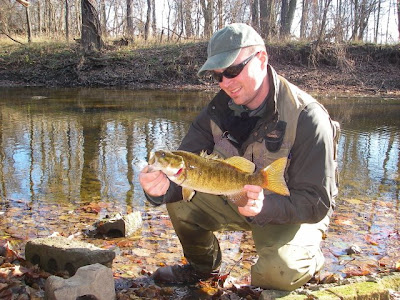 I moved to the next large hole the one I was heading for. Half the hole was frozen over :mellow: . I was able to get two consecutive chunky 13-14"ers right on the edge of the ice near current in about 4' of water. Fish must have spooked after that so I moved to the next few holes, but they were frozen too. I stopped at the middle one and smashed the ice and shoved it downstream hoping the fish would be back when I returned. Next portion of stream was beaver dammed and frozen. When I came back, nothing doing. It has worked before though. Water was probably too clear.

I killed an hour and a half catching nothing then went downstream and found two more nice chunky bass 14-15" on consecutive casts, in the same general area I killed them on the 15th. Fished under a bridge and my first cast brought about a float dunk and a 11' commando style smallie. Finally finished up on the way back up with a 10" dink on the walk back. 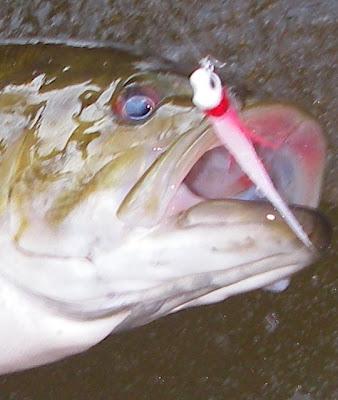 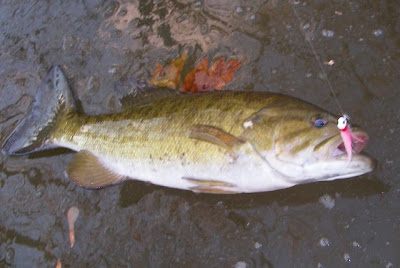 We really need some rain and a warm up or there won't be much fishing this winter. Low water is freezing quicker than flowing flow. The great thing is you can see every fish when the sun is out. They are still really spooky, but it is cool to see them out and about. It's a great time to explore new wintering holes even if you don't catch any bass, you can locate them and that can build the winter confidence. Confidence catches fish as surely as anything.