Woke up to snow on the ground, gray skies, and a slight drizzle. Highs were forcasted around 36-38 F. Jumped in the car and went about 100 miles east of the river I was on yesterday. Plan was to hit holes I caught fish in during the summer and hope there would be some winter fish in them. Water is super low. I hit the deeper holes and scouted through everything else, noticing boulders I had taken fish off of before as well as undercut banks that were held in place by the rocky terrain and sycamore roots.

Didn't take long. I was fishing the Float and Fly. The bait was down about 2' and I couldn't see any movement on the bottom even though I could see down 4' or more. The float dunked. A nicely colored 13" smallmouth came to hand. I tossed to a different part of the eddy over and over again biding my time until something sunk the float again. A 12" Smallie came home. Grinned. Fish were out and about. It looked about 2.5-3' deep in this eddy and I swear I could see the bottom and yet two fish had materialized on my fly jig. Started downstream and heard gunshots so I headed back up, pausing to catch another pretty yellow smallmouth 13" long.

I headed above the hole and fished a large, deep, rock filled hole. Tried the 'other' side of this hole. On my first cast, I got distracted. My float drifted down the slow current close to the rocky bank in front. Dunk. A nice fight and a lightweight 16"er came to hand: 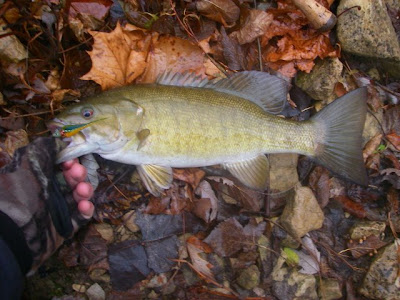 This would be the pattern: toss float and fly, look away for a while. The float would be gone. I finally picked up that they didn't want any action imparted. I caught two dinks and decided to do a normal summer wade, looking for signs of holding fish that would give away the presense of smallmouth bass.

This 14"er must have hit almost on the drop on a long cast. I looked away for a moment the float was gone. It was a pretty color so I took a pic despite the black flecks. 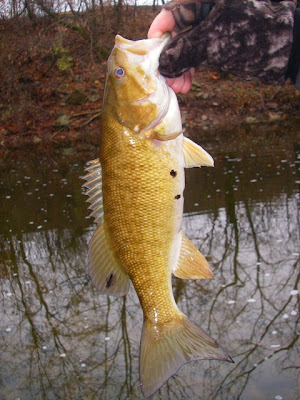 Got another 14-15" at the next riffle again as I was daydreaming. Another dink on the next cast.

Mike and I had waded this section last year and had hit a hole not far away from where I now was. We had success with Gunfish 95 that day at a hole above. Made the trek to the general area. My float sunk after waht seemed like eternity and a large powerful fish went for the laydown downstream. Turned him just in time, boy was he fat! Went 17". 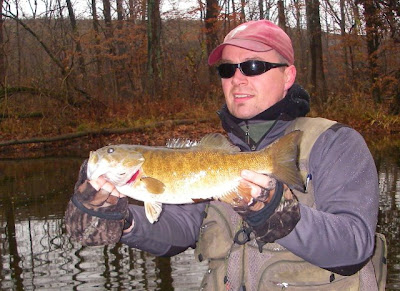 A couple drifts later another fish came out of the same general area measured 16". 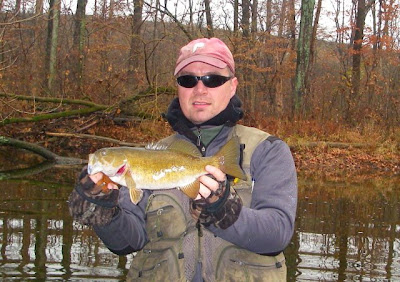 After a few more fruitless drifts, I turned back and hit some of the previous spots on the left nabbing two more 12" fish and losing a fish on the fight. 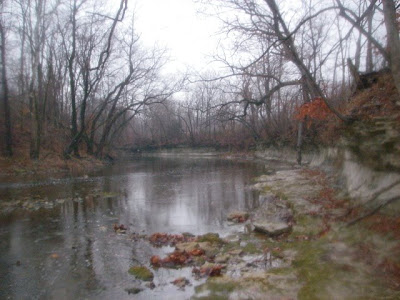