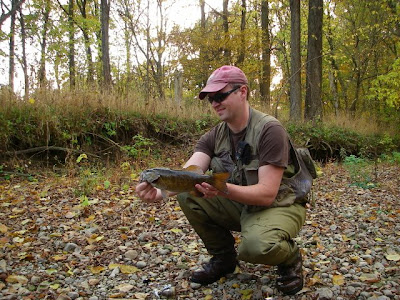 In Indiana the second half of this year we have had very little rainfall. The polar opposite of the record floods of the century we got early this year. For basically the last two or three months the fishing has been a crazy dusk bite.

This pattern has gotten worse and more predictable the last month and a half. The algae has died off and the water is very clear in many of the creeks while we've had few cloudy days. Beaver dams and leaves are everywhere making the fishing challenging. To top it off, all but the last couple hours of the day have proven fruitful. I have observed this pattern on a dozen different creeks, thrown finesse as well as topwaters, jerkbaits and cranks.

Fish are clearly hiding during the day. They find some undercut banks, wedge under a rock, tunnel under some leaves, etc. They aren't in play to my frustration catching numbers of bigger fish.

I again found this pattern on Sunday. Hitting the water from 3pm to 6pm, I had nary a strike until I walked up on a logjammed area and started dropping a tube down in the cracks, missing a couple of fish. For some reason, I tried a white shad double willow spinnerbait. Throwing to the back of some push water adjacent to a lay down I got bit twice and failed to hookup on a nice fish. Third cast was a charm. I couldn't believe that same fish would strike three times at the spinnerbait! 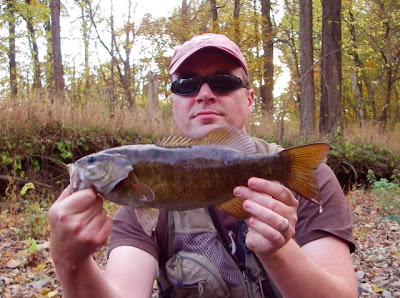 The bass was 16.5" and rather slim, but a beautiful dark brown.

Many of the 'fishier' looking pools had too many floating leaves to fish, so I bypassed them and moved deeper into the jungle. Picking up a couple of dinks. I hit a spot where a large logjam used to lay, only to find a smaller laydown with leaves piled up along the front of it. SWULP! Spinnerbait hit the water, started it, THUMP! That would be a good one. The fish was bulldogging me and pulling drag towards the brush. I finally turned it and it made another great run. It felt huge. After a few moments I got the bass in and was shocked to see a bloated, fat 17" Smallmouth Bass, that looked every bit spring pregnant! 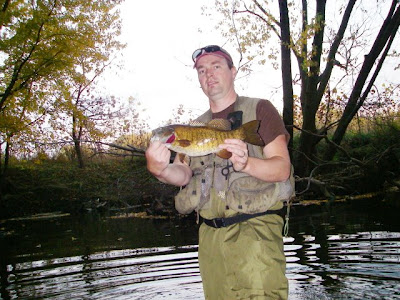 Managed a couple more hits, landing one 11" fish. It became to dark to go on, so I headed back.

6 fish in the last hour or less of the wade. None in the first two hours.

Sometimes I think it's not a hunger thing- the fish don't turn on and off. Maybe, just maybe, they are out of play under unfishable cover, cowering from predators.

Fun to catch fish on a spinnerbait basically ripping and pausing it. The bait is an achilles heel of mine.