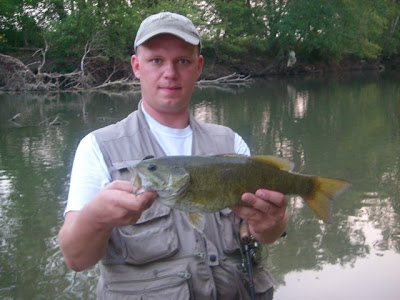 Firstrock called me up Wednesday about 2:40pm. John said he had the week off. Inspired by a post on the site we set out for a river in Indiana that really is blue. Got to a bit of river about 430pm.

John was throwing a Splashtail and I was tossing Wbuzz/Tube combo. We waded downstream for at least 2 hours with each of us catching one dink.

We waded upstream using topwater search baits. Lots of casting- little to no action. It all looked fishy.

When we went into a slight river bend John got bit where current slowed. I looked over and it was large- drag was spinning and I have to say I was a bit shocked by it all. John was redfaced and beached the fish. Fat Smallie. We were beginning to have our doubts, now they were gone. A nice fish about 19"


Well that was the beginning of the fun. We headed upstream and heard some sheep baying- or so it sounded. A deer ran across the stream left to right then disappeared in the woods. Then two more smaller ones seemed to be doggy paddling across but struggling. The hind deer seemed to be hanging onto the first. Why did it have pointy ears and a long snout :shock: ? John and I both thought Coyote at the same time. The coyote was grappled onto the back of that fawn tail in mouth trying to dunk and drown it. Here I thought I'd have a great Youtube vid, I reached for my camera to find it gone. Left on the ground where John caught his nice fish!

John swooped up a couple of river rocks and tossed them at the coyote and it scampered off. One of the coolest thing we'd ever seen! All from 30 feet away.

We kept heading upstream, John caught a couple of 14" Smallies.

It got dark and we decided since the river bottom was so flat we'd pull a JB. No light, no moon, just a lighter and some Marlboro Lights. I caught a fish on Splashtail and then we crossed casts- No one said anything about this. It took 10 minutes to untie. Then fish blew up on my bait a foot in front of me gave multiple heart attacks. We dropped things in the river, trebles caught pants and then we realized there was no moon! We finally made it up some riprap through the poison Ivy and onto a road that led back to the truck.

John caught 5 brown and I caught but 2, but it was a kickass adventure.
Posted by BT at 5:54 PM