Observant readers will have noticed the links to two German beer breweries on the sidebar. It's no secret, Weihenstephaner is my favorite.

The Bavarian State Brewery Weihenstephan. Nearly one thousand years ago it was the monastery brewery of the Benedictine monks, then the Royal Bavarian State Brewery. Today, as a regulated enterprise of the Freestate of Bavaria, it is a company run according to the precepts of private business. As the oldest existing brewery in the world, our brewery occupies an exalted site atop Weihenstephan Hill in the Bavarian city of Freising, surrounded by the comparatively still very young Weihenstephan science centre of the Technical University of Munich. Yet it is precisely this unique combination of tradition and custom, proven knowledge, and modern science, which gives the brewery its incomparable identity and permits it to brew beers of the highest quality. And, of course, we're more than a little proud of that.

The brewery claims to have been started in 1040. Tasting the fine beers now made by the state of Bavaria, I can see why. Here's Freising's location on the map.

My first sampling was the Hefe Weissbier. My favorite. Go. Run. Speed. Buy some. So good. Give this beer to a beer hater and you'll have an instant convert. The beer is like eating cold sunlight. Amazing. Widely available in the US for 2.20-3.50$ a 17ounce tall bottle. 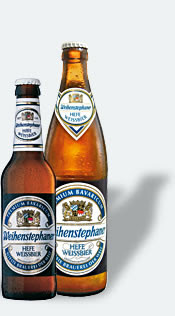 One point, Hefe Weissen's should be poured in a special way:

And don't stop there. There is a dark Hefe, the Vitus, Korbinian etc... all awesome in their own way.
Posted by BT at 5:27 PM

Email ThisBlogThis!Share to TwitterShare to FacebookShare to Pinterest
Labels: beer