Mike C and I got out for some January 1st Smallmouth action. Mike took his sweet time, so we ended up late to the stream around 1:45pm. The sun was out, the water was green and the bite was on, even if it took a bit of probing with FnF to find where the bass were in the first eddie. Perfect conditions. With the water up, I hoped bigger fish would be closer to the slackwater 'triangles' that seem to hold baitfish in cold high water. 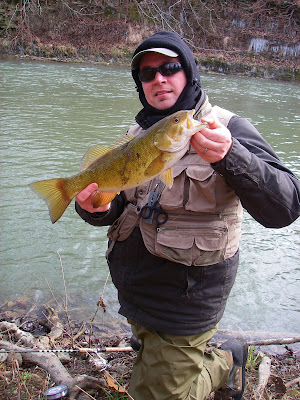 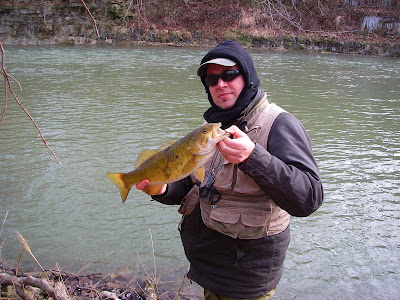 We moved to another spot, a deep rectangle pool current barging down one side, the triangular eddy was formed to the other side. Over the first few minutes a 13", 15.75", then this 17.25"er that actually went airborne and went on a couple of wicked rod bending runs. 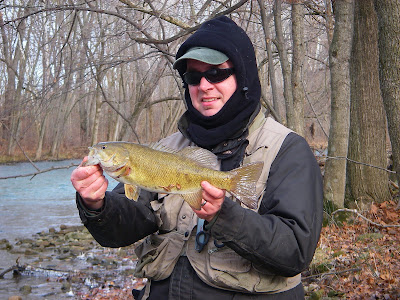 Mike was having trouble with line freezing. He finally broke through with a 14"er that hit when neither of us were looking. I nailed a slab rock bass and a dink SMB before we went looking for another couple of pools that mostly wasted precious time. Returned to the first pool, Mike got another bass 14-15". We were followed by a friendly country boxer and headed back to the second pool where I landed another dink.

Tomorrow looks even better.
Posted by BT at 7:12 PM