Set out to fish a creek at about 1400 cfs today before it blew out. Forecast was for rain all day. Tried a new spot hoping to find a new winter area near a creek confluence. Creek was pumping in brownish water, but not muddy. Things would stay good if the rain would hold off. Ground was kind of hard from lack of rains. I made a few casts, but couldn't find fish were I thought they would be. When I got above the feeder the water was pretty clear (14-18"), despite being high. I started to think about hitting a sure thing, so I left and went to a go to spot.

First spot where I nailed a bunch of good fish two Tuesdays ago held nothing. A couple light taps.

Went upstream after crossing. First fish, a 13"er came off a root wad. I was working a 4" black tube against the current and repeatedly dropping it in front of the root wad when the bait got struck.

At the front of the eddy, I threw Float and Fly off a log and another root wad (within 1' of bank, but with depth). The fly immediately got hit on the drop! Hell broke loose as I fought a large fish to hand. Commendable effort. It went 19" and had a hook scar from where I caught it last December. When everything is wet and it is raining, it is hard to keep the lens dry. Got another dink on FnF and left for another spot. 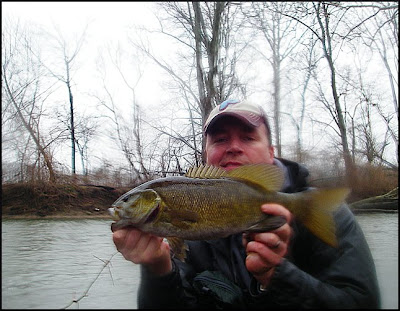 Mike and I had found a new winter hole with last week's warm up. Luckily, it was right down the road, so I hit it again today. Above this wide pool is shallow bedrock, so despite being right near the road, the fish stack up in there good. Both sides of this wide deeper pool have some good looking eddies. At the current flow level, I found smallmouth on the southern bank, which just happens to be lined with limestone chunk rock the size of ottomans. Working the tube slowly and letting it drop down behind each square or rectangle boulder, I lost two good fish pulling the tube upstream. The first was about 14" and I pulled/jumped the fish 2' in the air. The next got to the surface, but was never hooked. Sometimes with thicker walled tubes this can be a problem were the plastic bunches up on the hook point. First 5 minutes 0/2.

Decided to go to the downstream end of the limestone 'rip rap' and work my way up to set hook from the opposite direction. Kirbed my tube jig with a forceps to help in hookups. Tube fishing is all about minor adjustments sometimes.

A few casts later the tube got thumped and the fight was on! Nice fish who did powerful runs as well as surface head shaking. Finally to hand measured 17"+. I had taken to hanging my camera down inside my fleece. This seemed to clear the lens up enough to get better pics in the rain. A few parallel casts later a nice fish thumped right at my feet, fell just short of 17". Looks to be a female and squeezing off a number 2: 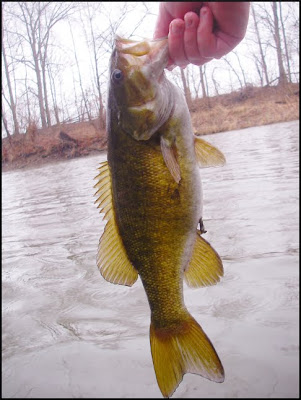 Flipped out where the last fish had come from and immediately got bit. 12" smallmouth bass. The key on all the bites today was working shoreline cover, parallel to the bank. Water had to be much slower and also have either rock or root wad cover.

I moved back up the bank, on one particular cast, the tube dragged slowly under a boulder. I felt a good thump from another fish up close to shore, short fight. Decent size. Badly damaged fish. Measured 18". Hope it survives. Seen more than one thin fish late winter 2010. 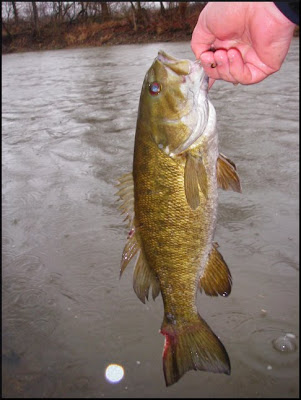 It started to be cold as the rain was soaking through winter coat, fleece, and shirt- (cotton!) Happened to glance back and saw two state troopers over my shoulder. They had seen my car and wondered what I was doing.

BT: Whoa! You guys scared the shit out of me!
Trooper 1: We saw your car and wondered what you were doing.
BT: Fishing.
Trooper 1: Bet your not doing very well.
BT: Actually, I've done all right 4 bass over 16". Water is up, pushes bass to the banks making it easier to find the good ones. Gestured at water.
Trooper 2: Smiling
Trooper 1: Well, you have more dedication than I do. What's your name?
BT: They call me the Lone Ranger.
Trooper 1: Really?
BT: Not really. Name's Brenden.
Troopers: Ok, just checking.
BT: Stay dry fellas!

Guess my soaked outfit did seem kind of silly. Never got above 45 today.