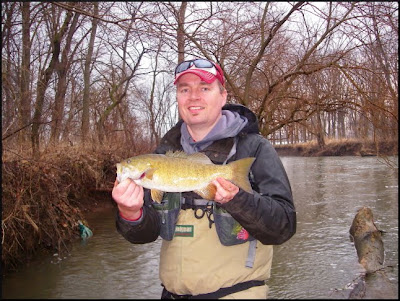 Mike C and I hit some spots today. First one was below a bridge we were suiting up and and decided to work a bank. I nailed a 14"er on a black tube right off the bank in 2.5' of water along some nice chunky rocks. Fought like a devil.

We got suited up and drove to the next spot. Mike nailed another 14" fish on a tube. Then I got a dink and 16.5"er on Float and Fly. Moved up to the next spot crossing the stream at a normally shallow area.

Nailed another just short of 16" on the fly jig then 7 more with Mike and I catching doubles and 4 in 4 casts on float and fly. Fish were swimming the circuit and many were caught facing downstream off the bank within feet of shore. One was caught on a [i]slow[/i] 4" grub. Maybe a foot from the bank.

We moved on and drove to honey hole, an hour in after a 30 minute drive and walk to the spot I finally landed a 16.25" smallie on a tube.

Walked back to the car and drove to another spot. Was working some rip rap when my tube approached the slackest area in the eddy which was literally at my feet. Another solid tube strike! This fish turned out to be a nice 17"er that went largest of the day.

Got in the truck and drove to the next spot. This one put us on a high bank with plenty of green pricker vines and branches that made it hard to work the bank line. We got a few slaps from smaller fish and finally I landed bass #13 a 12"er.

Lots of walking to and fro the car to get to the next holes. Though Mike only got a couple, he's on the board for 2010!