No fishing or fish Saturday. Naturally, today we get rain. Dreams of highwater hog in my head, I set out to patrol the muck for another big she-mouth.

Drove over the river, mud and high.

Feeders- depended on whether they were in the city or near agriculture. From muddy milk to decent.

Drove over my objective to see a stream in two colors! One half brown, the other half brown-green. Quick mental inventory of which pig hole would be upstream of the brown and therefore green- brown water.

Walked up and then across the stream, knowing I wouldn't have a lot of time
to fish the better water. If it came up too fast, it would be a long walk up to the next bridge then back to the car.

Black tube in tow my first cast had a fish on, and I missed after fighting it a ways. Didn't feel great. The pool is a big eddy at the riffle. Massive eddy with quite a big winding swirl. Found the fish facing downstream in the return eddy behind several boulders.

Just like the other day, it took a swing and a miss first. Couple of casts later I hooked into a second beast in the spot in as many trips. Thinner, but wearing an egg belly. Went 20.5": 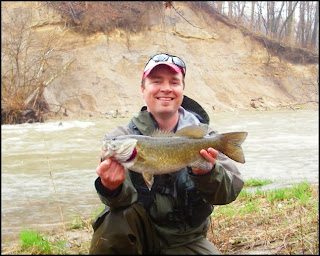 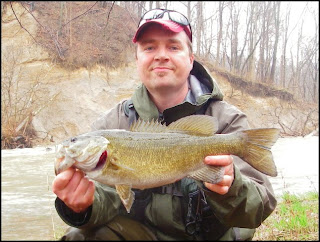 After that, I couldn't get bit again. That's been the pattern this spring. One maybe two fish at each spot. Left after 15-20 minutes fully satisfied. Drove home. Misson accomplished.
Posted by BT at 2:59 PM