Got off to start a vacation this week. I don't need to go to Bermuda or something like that. Rained. Water was clear too probably 4'.

Fish came off boulders in slackwater in winter holes. Started with a tube, thought I saw some movement below which wasn't a good sign- they didn't want the tube. 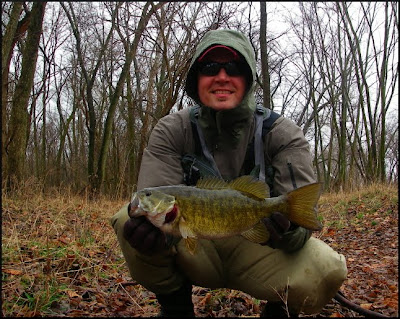 Hopscotched spots and got a real workout chugging to hit as many as I could. Water was clear and lower than I liked for smallies to be in some of the spots. Caught a chunky 13"er at one.

Was planning on hitting the mother load at this next spot. I was working the spot within the spot when the float moved. I set hook lightly and an enormous head poked up. Crap! this was going to spook out the best hole. Worst, I was up some high bank. The carp looked enormous, but I had basically kept it from getting in the current. I had to get around the sycamore and to the low ground below. While keeping pressure on the stupid fish, I handed myself the rod around the first trunk of the tree. I climbed up and down the middle onto the roots and into the water. Hook was clearly in that flab tissue called a mouth. I beached the fish as it fought like a sack of potatoes. Heaved it up on the bank for a photo... and 'recessitate' it . 30"+ :shock: 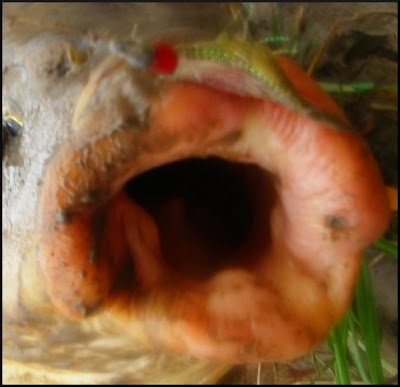 Thought I could have fisted this mouth, but I don't like touching them: 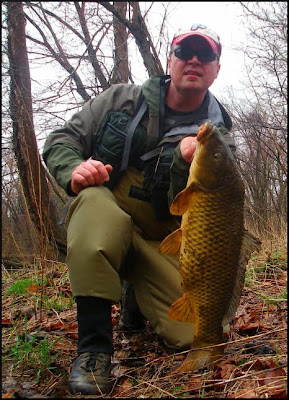 Got a great cardio workout walking to and fro various winter holes. Either bass were spread out, or catching one in clear water spooked the others. It was pretty much one and done at most spots.

Got this nice 16", which appeared to be female and fought like crazy. Out performed the carp, that's for sure. 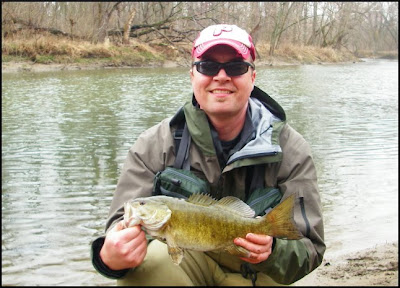 Email ThisBlogThis!Share to TwitterShare to FacebookShare to Pinterest
Labels: Big fish of the internet, fishing, fishing float and fly