Fished a stretch I'd waded a couple times in Summers past. Good for numbers, but nothing huge. Wanted to see if I could find Winter holes and maybe a pig or two that went uncaught. Creek used to give up 20-22" smallmouth on a semi regular basis, but has seen a drop off by all accounts since 2008-2009. It's fished ok for me, but seems a shadow of it's former awesome self. Still, worth a look in Winter for that 20" plus potential.

You have to be able to fish undercut banks and tree scour holes. A lot of silltation fills in most else. So I thought I'd gallop up to a few holes and try them out. Water was pumping (nearly 200 CFS), clear to about 2.5-3'. Air temp 36 degrees. Once again, not much sun. Stunned my first high fish population area seemed to have no slow water. Bank to bank fast current. I kept going, maybe a mile. Found a pile of long dead downed trees. Out in the middle, I faintly saw some very large carp spook away and come back around. The only slack was at the tip of the roots upstream and under the logs downstream. Pricker vines thick as my hair made it difficult to get the under the downstream tree trunks. Didn't seem as deep as upstream anyway. I climbed on the middle of the logs and free lined a float and fly jig parallel to the trunk. The stillest part just down from the upturned root ball.

Finally, a thunk brings an 11" dink to hand. I had already burned too much time. Tried to get the little jig under the trunk as much as I could in the still water there, only 4-5' from blazing current. Another thunk. This time a much bigger bass, run after run and trying to unhook on roots and branches. Nope. Not while I see your every move from just above. Fat and yellow, in my hand, and 18". This changes things. Look for wood and back current. 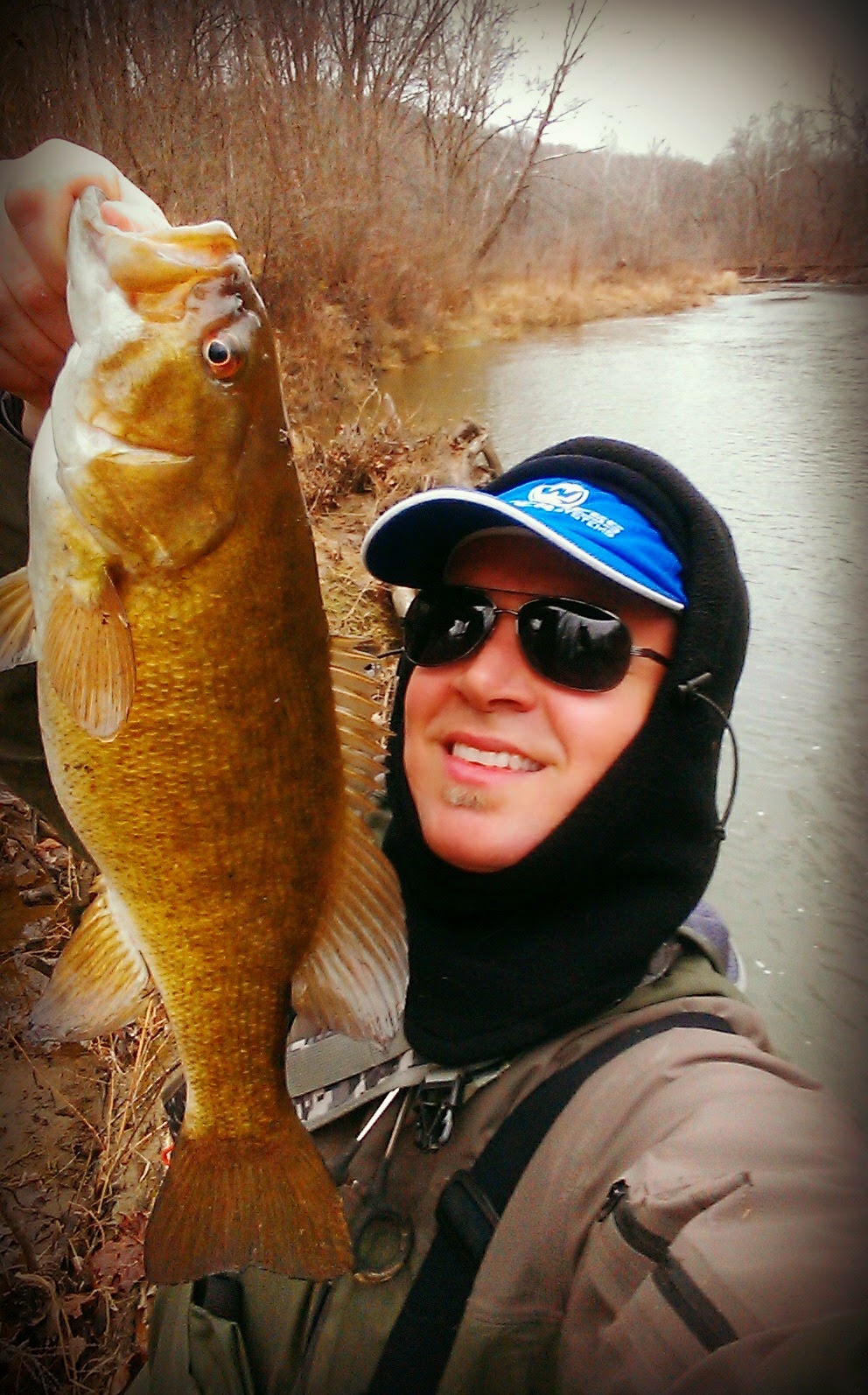 Ahhh, was hard work, but stumbled across them. A quarter mile upstream, in an eddy created by outside bend and downed trees, my float sinks twice. First a 14"er. Then a 16", fat, goes hog wild and jumps 1' out of the water with 30's water and air temps! Crazy fish got in the current and put on a show. A micro dink and I head back to the wood, pulling another 14". I slog back and try another spot. Walking on a tree again, this time my luck isn't there. I see a couple decent smallmouth jet out from under the upstream rootball as I step down it to get a better look. Close to dark I call it quits. Lots of walking, kept the numbers down. Pretty pleased anytime I can find new wintering spots.