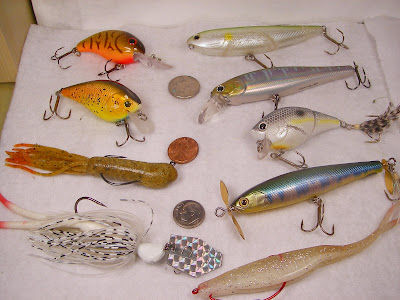 Most of the time for me, bigger smallmouth bass are attracted to bigger food. Only stands to reason the meal better be worth the energy spent! Now when I say bigger baits, I mean bigger baits compared to what most people throw on average for smallmouth bass.

For some reason, the average fisherman believes smallmouths are snackers. Throw a 2" or 3" grub and you'll catch a lot of fish. A lot of small fish. Throw a bigger bait near bigger fish and presto! More big bass.

I guess this is a good thing. Novices don't need to be taking smallies home in buckets/stringers. They don't throw close enough to cover or throw big enough baits to regularly bring out the big smallmouth bass.

Now, when I say bigger baits, let's not get crazy. I'm not throwing 7" swimbaits- yet. Just bigger than average. I've found a nice niche of what will catch numbers and size. Someday I may be headed down the big fish only route. Not yet.

Most bigger baits can really be hurled. On any small-medium size stream the bass hear you coming. The longer you can throw, the better chance you have of presenting to unspooked bass. It's also fun dropping a big 4.5" tube down into a log jam .

Try it, you'll be surprised how many dinks you can catch too.
Posted by BT at 11:44 PM