Fishing another Stretch of a Small One

Did the next stretch up from my last report. Hoping to eventually get to that one hawgie heaven somewhere in Nowheresville, IN USA.

Got in the water about 2pm and it was hot. I am starting to get a glimpse of what the soldiers in the army and marines might feel like in Iraq in all that gear. Just a glimpse, 90 doesn't begin to compare to 130.

Starting to get used to the heat . Found a nice 'C' to wade for easy walk back to the car.

Couple of hundred yards up, I caught my first three fish 12-13.5" all on tubes texposed. One got gut hooked, and in the fight started to bleed. Bent the barb, but the damage was probably done. Tried to get the fish going again, but he wouldn't have it. So long partner! I hardly knew ya. First time this year I gut hooked a Smallmouth.

Fishing was very consistent, even if the water wasn't. Each spot would produce 2-3 fish. By the time I got to number 16(all tubes), my biggest fish yet was only 14".

The next hole looked promising with some riprap and downed trees in the middle of the stream above which was a 120 degree bend.

I made a deadeye long toss with my popper in between and parallel to two upturned trees: pop, pop,POP, pop, pop, POP, pause, SMACK!
As I struggled to catch up to her downstream charge on my 5:2:1 reel, she wrapped a branch, so I ran foward and grabbed her before she got off. 17" and some change. One of the stumps you can see behind me in the pic. You can see the branch she wrapped on behind my left buttock. 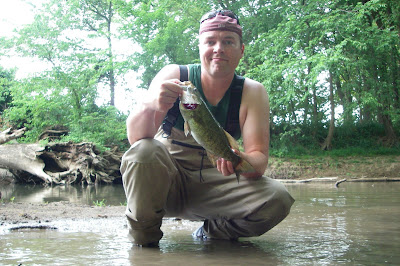 The riprap ahead looked really good. I have been working on a new technique with EWG texposed tubes. By bending out the hook more, I think I'm getting a much better hook up rate. The hook can't help but catch more skin. Problem is, you snag wayyy more often. So, I tried today to use the tube more like a pendulum. Casting across stream as much as possible in the rip rap, keeping rod tip up, letting the tube glide from the opposite bank of the riprap (also where the fish seemed to be sitting). When I had to go in wood I did the same thing were I could see the branches. When I couldn't I used an identical tube unbent. So far so good.

Got three more fish off the riprap ahead including this skinny 16"er: 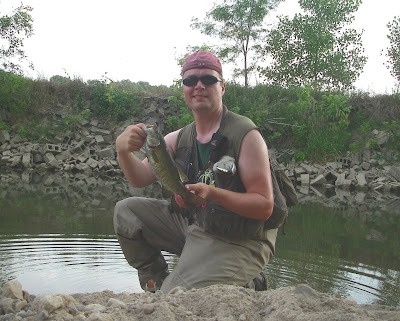 With this fish and really all of them in this stream, I noticed for their length they were thin. Could be time of the year, but several times I measured a fish and couldn't believe they were as long as they were. I think because they are thinner in this stream in general. Or maybe they are growing faast because of all the tree cover?

From my four trips out here, I've caught gobs of fish each time- there is an excellent population of SMB. Maybe too many? Might not find any 20's in there because of the sheer numbers of fish.

Had one more big fish encounter, failed to get a hook twice, first swiping at a WB, then a Popper. Oh, well.

Started to sound like T-storms so on the way back I pitched down from above the rip rap and nabbed a 15"er on a tube to put me at 24 smallies and 2 Googs in 6 hours. All on GM Pumpkin or Yum tubes 1/8 or 3/16(except the one popper fish). Well above 80% on hooking fish on tubes, buut still just a theory at this point and wouldn't work well out of a yak. Many strikes came when the tube was dead, or when it entered the water off shore or rip-r.

Made it back to the car in time to avoid the no rain.
Posted by BT at 3:05 AM