Hit the water for a wade today hoping for a repeat of the last couple of rainy overcast days. At first, it seemed like I might get that, but then the sun came out and it was muggy hot like no other day this year.

The fishing was hotter. I started out with an 4" Xcalibur 'Jimmy"- High dollar LC Sammy knockoff that is nearly identicle, except for the colors. I've had the lure since last year, but never really give it a shot.

The Jimmy was amazing. Fish were hitting at it from everywhere. It casts a country mile and a half and rattle as I walked the dog attracting attention. Really, I was casting the thing like 50 yards with no overhead cover.

So I missed a few fish on the Jimmy, then switched to a ZellPop and had three seperate swipes at it from near a huge boulder. The fourth connected and produced this fish that went 18": 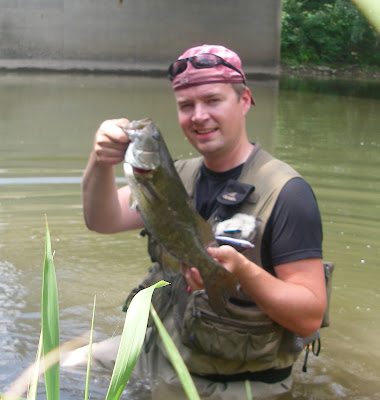 Caught a fish on a tube and had a lot of walking through shin high water. Found a likely spot in some shade and caught 4 Googs on 4" tubes.

Then I saw some foam on the water and plenty of boulder in the stream with some depth. Several fish again missed the Jimmy, so I pulled out the ZellPop and tossed over by a big protruding boulder. A fish nailed it- it was just an 8"er but another bigger fish followed it nearly ashore before turning away. I quickly took the dink off and tossed the popper back out the fish nailed it: Another 18" 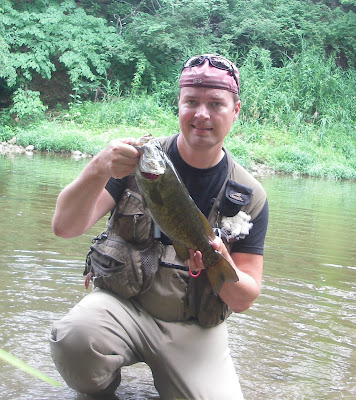 Put Jimmy back on and a 16"er smashed it as I brought it across current. Then another the same size a hole up! Nice. When I got to the top of the riffle, three more fish blew up at the JImmy- this was par for the course throughout the day. If I caught 10 fish on it, I had 25 missed strikes- violent strikes!

Then I caught like 25 fish on 4" tubes and the ZellPop. It was an every other cast thing. hardly any dinks.