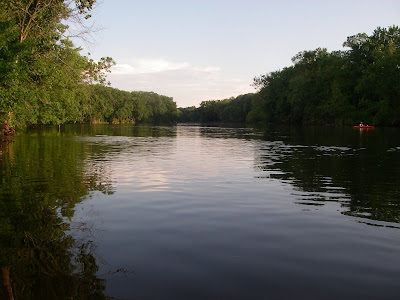 Wool, JbCook, and I floated the St.Joe again, this time the stream wasn't channelized. There were actual riffles and ledges and islands. The current was kicking.

Smallies were hitting my popper and this time Mike was armed with an Xcalibur popper too. Started catching fish right off the bat, 3 12-15"'s. There were eddies created by downed trees along each bank, but they were hard to hold on and fish because of the current.

Mike was behind a particularily slack one on the slower side of the river when he yelled," Pike, pike, it's your pike!" He was doing battle with something of size. Again we were probably a couple hundred yards apart. I had been jonsing to hook a pike and geta picture with one. We all started paddling towards him and looked like the fight was over when his rod stopped moving and the fish shook loose. Found out later it was a 2' foot gar! Daresay I would have just shook the thing off too.

As soon as that fish was not getting committed to camera, my next cast produced a 'slurp', which initially felt and sounded like a 14-15"er hit my popper. Er, then it exploded and pulled like a mule, barely managed a sideways jump, and I yelled, "it's a monster!" It was. I got the fish in close after several runs and got a good look at it. Easily 20" + fat and beautiful. The fish tired- my popper was across his lower jaw with trebles about evenly spaced for my thumb. I grabbed it hard and hoisted it halfway out of the water when ole mossback somehow shook a treble stuck my thumb and I dropped her before measuring and picture taking began!

Jason had come most of the way over, but didn't get a real good look at it.
Uff, I felt as bad as not catching it at all, never getting to enjoy the look of that fish before slipping it back into the water.

Pattern was same as the day before for me. Working the popper parrallel to the bank up or down in the slower water.

It thunder stormed on us when I caught my seventh smallie another missed. Mike and I were under a tree for about 20 minutes- the rain got stupid and we got soaked. Mike had also caught a couple using a longer pause.

Jason was on the other side of the river in his rainwear, doing survival mode.

Fishing slowed a bit after the rain, I managed 6 more for a total of 14 SMB most 14-15.5", one behemoth and a couple smaller 12-13"ers. Had another huge fish splash the water hard and miss the bait.

Also caught a longear sunfish on the rear treble of the popper and 3 Googs. 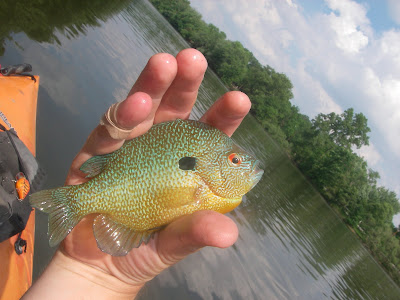 Below a water treatment plant where aquatic weeds were growing in abundance I saw about 2 dozen gar playing and rubbing each other in the weeds. After unsuccesful attempts to snag them, I moved on.

Jb played and lost some big mystery fish that were either huge walleyes or big smallies- I let him tell his tale.

here are some pics of the river: 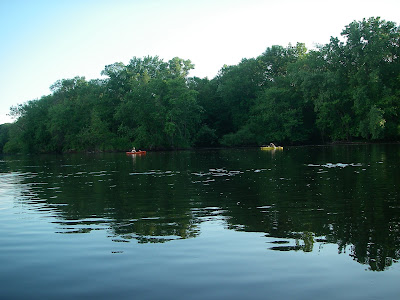