Met up with Riff-Raff for an all day wade about 930am we got on the water. He started working a large pool downstream a few shelves like steps that water fell over.

He caught couple or three smallies right off the bat on a chatterbait as well as missing at least that many. I was throwing a Sammy 85 with newly bucktailed treble. Caught two bass on the lure including a 15"er. I worked counter clockwise along the huge deep pool and finally made it to the water ledges/shelf. Ran a Wolkabuzz across the ledge and a couple smallies popped out from under the ledge and considered the bait before retiring back. I quickly switched snap to a black tube and pitched it gently about three feet from where the larger of the two fish had emerged. Fish jetted out and took the tube . 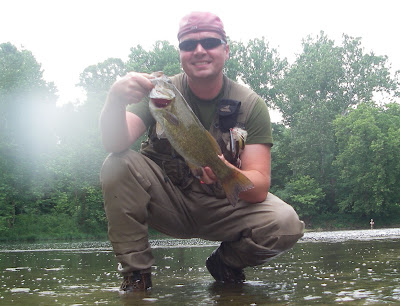 Jim caught one at the back of the pool, you can see him in the background thumbing for tube bites, it went 16".

We waded downstream and Jim caught another 16"er. Fishing was slow after that with Jim picking up most of the fish on Chatterbaits, occasionaly a tube. I caught a bunch of googs on a tube. It wasn't until we headed back upstream I started throwing the Sammy again and catching fish. The Feathered treble seemed to help fish locate the bait better than Monday. Caught a couple more on a grub and then a biggie hit the Sammy, my line immediately snapped- the sharp hooks had cut away at the line that had been wrapping while walking the dog. Fortunatly, like last week the fish jumped and threw the bait clear and I got it back! We waded back up to the starting pool and I caught another 15.5"er on a Jimmy that didn't fight- at all.

We drove to the next stream as some very scary thunder hit right close to us. Beautiful smallie habitat. It rained a little on us during the day.

The fishing was either picking up late in the day, better stretch, or turned on due to weather. We moved up I picked up fish on tubes (15") and cranks. Some of these fish were right next to super fast current in eddies caused by rip rap with the stream being 8' wide. Caught another fish on Jimmy, then another on a long cast to the next pool that went 15". We moved up to the pool I switched to Wolkabuzz and talked to Jim as a fish came out of nowhere and destroyed it right in front of Jim near shore. To my shock it measured 18", even though it didn't look that big while fighting it. Here it is with Jim freeing Chatterbait from behind the tree The fish may have come from. He hung on and caught a skinny 15" after I moved up. 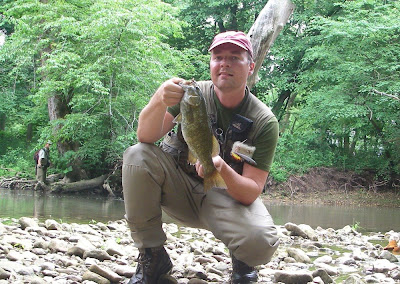 Jim caught a bunch of fish at the confluence of a couple of stream arms. We decided to split up. I went left he went right.

Saw ahead where a boil had appeared by a Sycamore tree. There were two jutting out into the current providing protection from current. I carefully worked the rear tree first, On the third cast, I hooked up with and fought this nice fat 17"er. 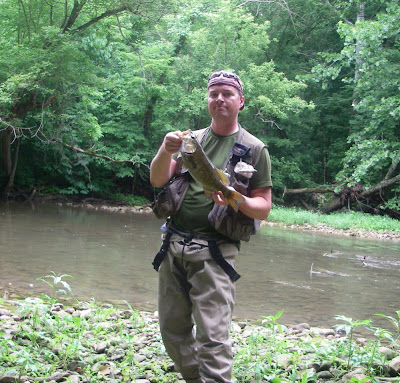 Put the Jimmy on and walked the dog from the top tree to the next when a really big fish attacked the lure. It bulldogged and felt heavy. When it finally came to hand it was my third 18"er of the day . 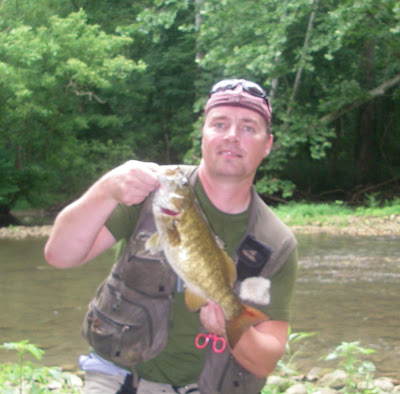 Then I tried walking the dog past the first tree as far as possible- the Jimmy played like a champ because I could make super long casts. A big fish missed then got the Jimmy as I walked it past. The fish pulled hard and I saw another good sized smallie follow. It went 16.75"

When I finally met back up with Jim he had caught 6 more SMB including a 17", I was at 28 SMB. We decided to keep going. Jim caught 5 out of the next 6 fish on chatterbaits. Including a nice fish that went a hair short of 17".