Waded a new stretch of small stream today. Water clarity was stained down to about 3'. Felt good to be in the water.

Took awhile to get to the first fishable hole, but I knew they would come. First cast to the first good hole produced a 12"er, then a dink. Bigger fish at the front of the pool swatted at and missed Wolkabuzz twice before I gave up and moved on.

Trouble was basically first time on this stream and the sun preventing me seeing what was ahead. Lots of wasted casts initially to 6" of water .

Followed someone else's foot prints for quite awhile...wonder how they did?

I tossed tiny 1.5" RC LC silver crank to a likely ambush point far upstream near current. Right after it hit the water a smallie exploded on it! Fish jumped a mile high and made it to a log pile, where somehow I got him out! Went 17.5". This fish had been caught before! 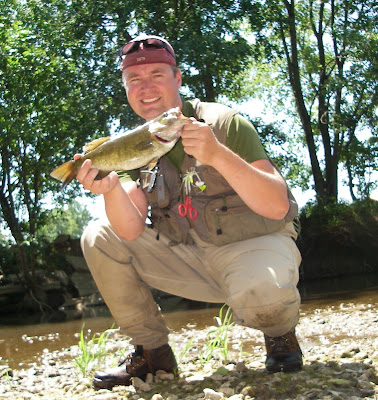 Came to another run and thought I'd try the popper again. First cast a 12" hit it as soon as it hit water. Then I worked it for a while slow and nabbed a SMB that nearly hit 15".

Then I hit a tree with it and the rear treble was kaputt.

In between holes I'd pick up a couple of fish on pumpkin tubes.

Fired GanderMT 3.5" Red Pumpkin tube with red marker on tail to a likely ambush point on some riprap near 'current. Smack! Fish hit it right away and got stuck, he tore ass downstream right at me, when I beached her she went 18"! 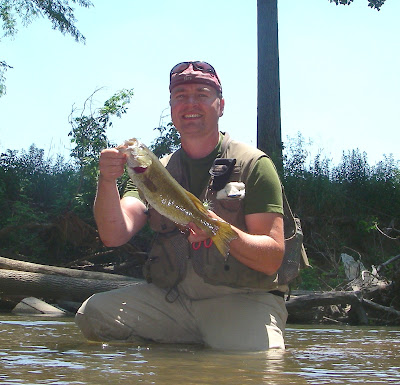 After that there was another fish on a tube. walked for 20 minutes and hit another 12 and a 15"er on tubes at the tail end of a run.

Waded upstream and caught another 12" then cast into some current off a log. When my RP tube came over the tree I sensed something was amiss. Thunk, another bruiser. 17 3/4" 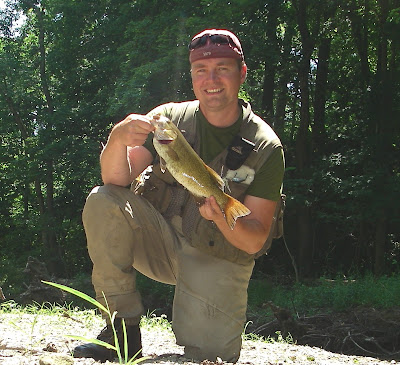