Wool (Mike), Rusty T, JbCook (Jason), smalliedawg (Bill), and I (me) set out to float the St. Joe river. It was a large fast channelized stream, Bill told us to fish the sea walls and whatever wood was in the stream.

The previous day, the three of us did the mule kicker of all mules aided by lots of heat, sun and hangover lack of sleep. We decided to get a later start so to avoid the scalding sun.

We got on the water about a 4 mile stretch. I quickly snagged a Lucky craft crank on a rug and spent 20 plus minutes wrangling it out. After, there was far too much weed to effectively fish a tube. I was quickly getting frustrated and perplexed by how to catch any fish with my normal methods. Further

Jason caught a nice 17"er from the other side of the stream downstream a fallen tree. That was a good sign. Bill was slowly chucking a tube or senko at the sea walls and I saw Mike chucking a Wolkabuzz. At times the river was 500 yards wide. The fishing started out slow and only Jason was catching fish intermittently on tubes he had 5 or 7 SMB. We were mostly far apart because of the immense area to fish.

I was done, fried, kaputt, the previous day, drinking, mosquitoes, lack of good sleep, sun, snags. 4 hours into the trip with zero fish, I had quit fishing halfway through.

Bill picked up some on a senko, when Mike became lustful of getting a burger at a riverside restraunt. Here they are climbing out of their boats. 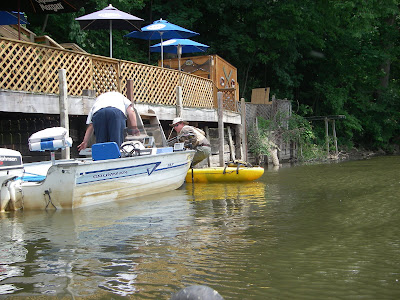 I admit, the camera was out because I expected Mike to end up in 4 feet of water . His army training paid off . No sweat. JB and I were bigger sissies about going in so we went to the other side of the river and fished near a cold water drain then waited. I tossed a tube under a tree slightly downstream and took a LMB out- my first fish. I then saw a big bass chasing baitfish around and switched to a popper after a fluke got nothing.

About 45 minutes later the guys were done eating and rejoined us waiting on the opposite shore.

I decided to work the popper since so many had missed the WolkaBuzz a day before. Worked the sea wall parallel to the shore casting straight down to keep the bait in the zone. My boat was nearly on the bank, but everyone else was way ahead. A 14" SMB destroyed the popper 2 feet off the sea wall and fought like crazy. Now I was getting into it! A couple cast later a nice 15 and then a smallies about 16" destroyed it. I caught 7 fish 14"-16" in a matter of minutes. All these fish were supercharged. The fishing only slowed down when I ran into a plethora geese and cottonseed on the water, quickly fouling my casting.

Ran into Bill catching fish on a senko behind bridge pilings- caught another SMB on the Popper- this was fun.

The last seawall to the take out produced 4 more smallies and a couple of near misses including a fish that took about 4-5 swipes at the popper missing each time! I was able to rear anchor and use weed beds to slow my yak while bringing the popper right up stream. When the popper passed the second of two stairwells to the water a big fish slammed it from that direction.

It felt big, and when I saw it, I peed a little. Screamed like a chick. Here she is another 18"er: 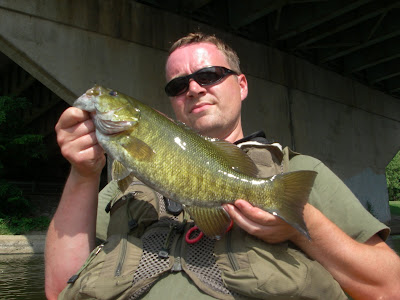 All together I managed 12 SMB, a Green Sunfish, and 6 Rock bass on the Popper in about 1.5 hours of tossing it. One LMB on the tube. This was a bizarre and technique changing event. I've caught a couple before, but never like this. The same spots totally ignored a passing buzz. Must have annoyed fish into striking slow enough to bring them up from 6 feet of water.

The lure was an Xcalibur Popper which has an awersome look to it and well weighted for slinging off long casts.
Posted by BT at 3:11 AM